"My grandfather - Father Frost": EVERLEGAL is a partner of the Ukrainian New Year film

A special project of inclusive cinema in Ukraine 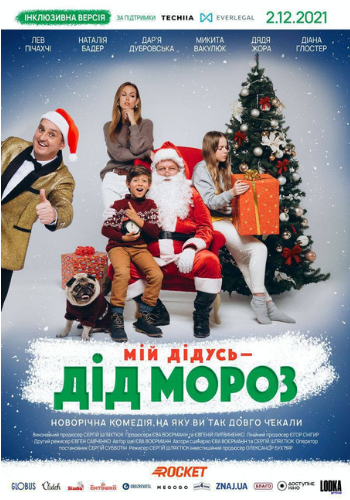 This is a New Year's family comedy about the adventures of a nine-year-old boy Maxym, whose only dream on the last day of the old year is to find his grandfather, who is Father Frost himself. That`s why he heads directly to the capital in search of him.

This film is a special project of inclusive cinema in Ukraine. With the support of EVERLEGAL and Techiia Holding, the film is available for viewing in the cinema for people with hearing and visual impairments.

Did you know that there are about 1 million people with hearing and vision impairments in Ukraine? Many of them have never been to a cinema in their lives!

But now films in Ukraine are becoming available thanks to the inclusive cinema - just such a film is "My Grandfather - Father Frost".

Modern technologies were used to create a version of this film that is accessible to the widest possible range of viewers, including those with visual and hearing impairments. The project of inclusive cinema in Ukraine is the initiative of the NGO "Fight for Right". The main purpose of this initiative is to provide accessible video content (films, TV shows, cartoons) for people with hearing and visual impairments by creating audio recordings and adapted subtitles and placing them on the Earcatch and Subcatch mobile platforms.

The inclusive version of the film was made with the support of EVERLEGAL and TECHIIA HOLDING.

Now, using modern technologies, people with disabilities can go to the cinema and watch a film on an equal basis with other people. The main goal of such a project is to make the availability of films a principle, not an accident.

Support for this project is important for Sustainability direction in EVERLEGAL.

Creation of accessible films for people with visual and hearing impairments is a huge step towards achieving the Sustainable Development Goals, adopted by the United Nations, namely:

We strive to continuously increase our contribution to sustainable development in Ukraine by supporting such unique initiatives.

We invite you to watch the Ukrainian New Year film "My Grandfather - Father Frost" from December 2nd in all cinemas of Ukraine and use the free apps Earcatch and Subcatch, which you can download in Google Play or AppStore.

EVERLEGAL – PARTNER OF THE FUTURE