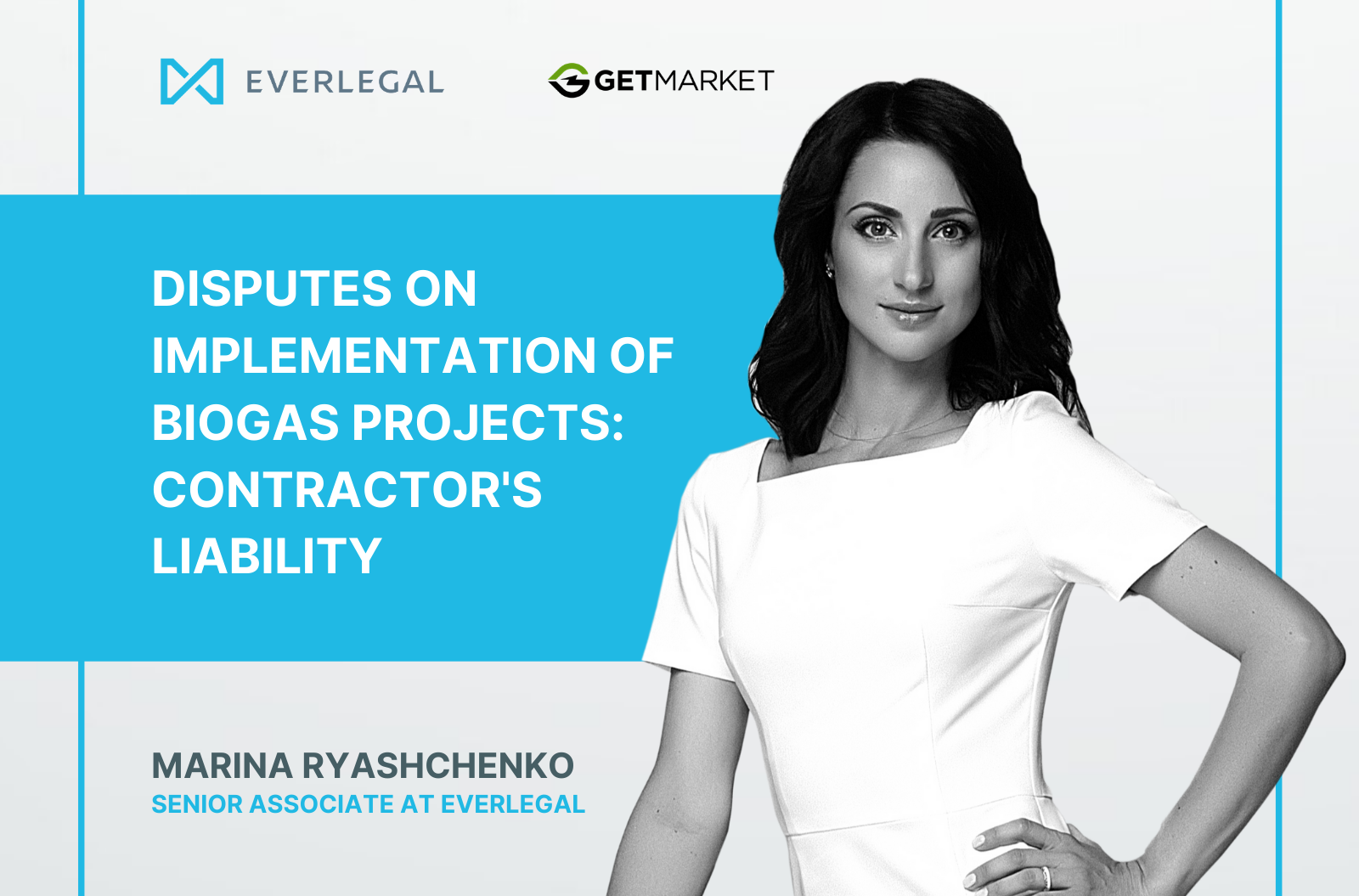 Read about the details of disputes on implementation of biogas projects that arise between an employer and a contractor and minimization of risks in the new article of EVERLEGAL Senior Associate Maryna Ryashchenko for GetMarket, a platform for renewable energy investments.

Read the article below or on the GetMarket website.

Information about the author:

Marina Ryashchenko - Senior Associate at EVERLEGAL, focuses on International Arbitration and Cross-border litigation. To find out more about Marina follow by the link.

During implementation of biogas projects quite often disputes arise between an employer and a contractor on their contractual obligations. While the contractor's claims relate mainly to due and full payment for their services under respective agreements, the employer's claims are far more extensive.

When a company decided to build a biogas plant, the ideal scenario for its execution looks like:

The employer expects to receive state-of-the-art plant which will meet their needs and potential of specific quality and cost within the specific period of time. However, in practice, during the implementation of biogas projects the employer quite often faces a number of complications and, at first sight, unforeseeable problems, that may further result in a dispute. Some disputes, of course, may be settled by way of amicable negotiations, though most of them are submitted for resolution to a court or arbitration.
The employer, who is not happy with the quality of services and the outcome provided by the contractor can reasonably claim for protection of their interests. As a rule, the employer's claims to the contractor regarding the implementation of a biogas plant project concern delays of execution and quality of services rendered by the contractor (design and performance of the plant).

Every contract on design and implementation of a biogas plant shall include concrete deadlines for execution: the end date of the contract and intermediate dates for each stage (design, construction, personnel training, biological start-up and commissioning). Any delays in design, construction and commissioning may cause significant damages to the employer.
In case of delay of performance or the executor's failure to perform their contractual obligations, the employer has right to claim the recovery of incurred damages from the contractor. However, the question arises, what damages caused by the contractor's delay of performance can be reimbursed and how to quantify them.
As a rule, at the early stages, like designing, developing supporting documents, construction, the employer's losses may be either insignificant or it may be difficult to assess them. In this case, the employer may be entitled for liquidation damages in the amount specified by the contract or by applicable law. Such liquidation damages shall be calculated for each day of delay from the day of the planned completion until the actual performance. However, it should be noted, that the contractor quite rarely agrees to compensate any delays during the implementation of the project. Thus, most construction contracts contain provision on limitation of liability of the contractor if such delay was outside their control. In this case, if the employer files a claim the contractor may lodge a counterclaim to the employer requesting prolongation of the contract for the period of the induced delay and claim exclusion of their liability for consequences of such delay.

Design Defects of the Biogas Plant

If the contractor made a mistake in the design of the biogas plant the employer, as a rule, may face a number of problems. For instance, during the construction or commissioning of the plant some mistakes or omissions of the contractor made in the design of the plant may be found: engineering mistakes that make impossible functioning of the biogas plant as a whole or a part of it; improper equipment that does not fit the technology or is not suitable for operation in certain climate conditions or with certain types of substrata, etc. If such defects are found the employer would need to substitute of modify some parts of the equipment of the biogas plant and as a result will bear additional expenses that were not provided by the contract. Such additional expenses are considered as the contractor's direct losses and shall be reimbursed by the contractor.
Naturally, the employer may also request the contractor to correct such design defects at their own expense, though, in practice, the contractors do not recognize their making mistakes while designing biogas plants, explaining the defects by the unclear or improperly stated technical assignment. Nevertheless, while resolving disputes on design defects, the court or arbitration tribunal normally take the employer's side since it is the contractor's obligation to design a biogas plant that will operate and produce biogas.

How to Minimize Your Risks

If you pay due attention to the determination of the contractor's liability during negotiation of the construction contract for implementation of the biogas complex you can effectively protect your interests if a dispute arises.