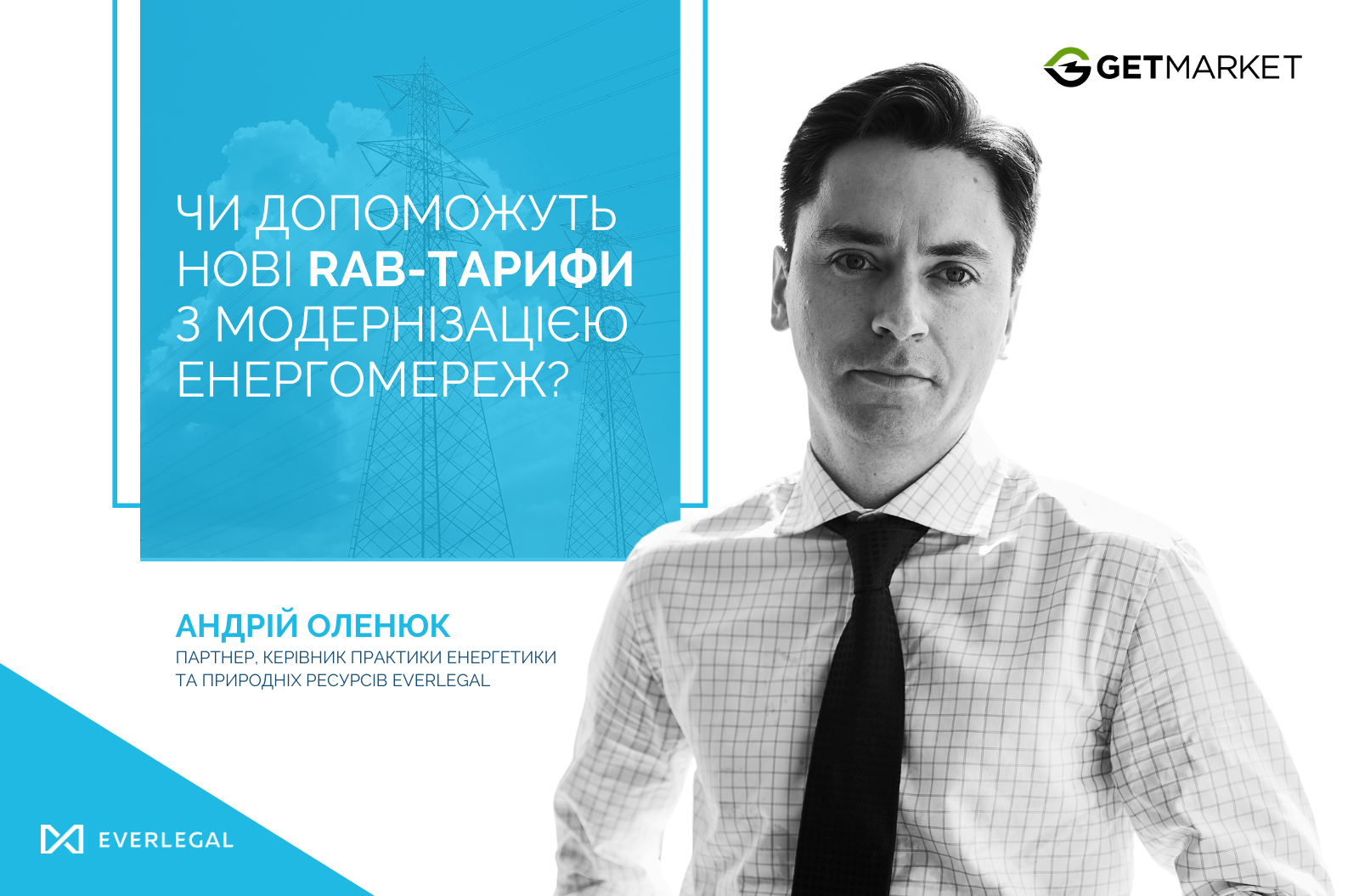 GetMarket platform in conversation with Andriy Olenyuk, partner at EVERLEGAL, about the urgency of grid modernisation in Ukraine and how recently adopted new RAB-tariffs can help the state solve this issue.

Read the interview below or on GetMarket website at the link.

- Andriy, let’s start with definitions. What is RAB regulation and why is it becoming relevant in Ukraine?

- In Ukrainian, “RAB-regulation” or “RAB-tariffs” is slang. It comes from English and means “Regulatory Asset Base Tariff”. RAB-tariffs designate the tariff system for distribution system operators (DSOs), in other words, electricity distribution companies (in Ukrainian – “обленерго”), to make these tariffs commercially attractive for electricity distribution companies and acceptable to the consumer in terms of the size of these tariffs. RAB-tariffs should replace the old tariffs, which until recently were introduced in Ukraine and were based on the tariff system “cost-plus method”.

- Why did the previous tariff system not work?

- The previous system actually worked. However, this previous system worked inefficiently. Inefficiently to the extent over the past 20 years of the operating tariff system, we have a high percentage of deteriorated distribution system infrastructure, as well as high tariffs, and at the same time, we do not see the intention and incentives for electricity distribution companies to invest in the modernisation of existing power grids and create new capacities.

- What will be changed with the new tariff system?

As of today, Ukraine is in a situation where the deterioration of distribution system infrastructure is higher than the deterioration of distribution systems in European countries and, at the same time, Ukraine is the leader in the number of losses in the power grids. According to various data, approximately 17,000 GWh of electricity was lost due to deficient, poor operation of the power grids in 2017 and 2018.

- What rates of return are being implemented and how will these figures stimulate the DSOs to improve their performance and efficiency?

On 26 August 2020, the NEURC (National Commission for State Energy and Public Utilities Regulation) adopted a resolution making the application of RAB-tariffs by DSOs in Ukraine mandatory.

Such distribution of the rate of return based on the regulatory asset base creates an incentive for electricity distribution companies to invest in new infrastructure and assets for further increase of their profit. At the same time, the RAB-tariff formula must work in such a way that DSOs will have to comply with certain regulatory requirements to remain in the RAB-tariff system. That is, it is like an incentive for DSOs to carry out certain activities in accordance with certain criteria. These criteria include improving the quality for provision of services, reducing electricity losses in power grids, and investing in new infrastructure.

- Can state-owned electricity distribution companies attract private investments to modernise power grids after the introduction of the RAB-tariff system?

- Yes. The rate of return on new infrastructure and the new regulatory asset base is commercially attractive. No matter what is said, 16.74% is a good level of profit, which allows you to attract both equity investments and loans from financial institutions and implement projects on a commercial and market basis.

Another story, and it needs to be explored more, is whether the rate of return of 3% on the “old’ asset base is marketable and commercially attractive. To understand why the RAB-tariff in Ukraine is based on such a low rate of return, we need to explore the history and look at the specifics of Ukrainian power grids. During 2013-2018, the State Property Fund of Ukraine assessed the regulatory assets base of various electricity distribution companies and under this methodology, the current value of the regulatory asset base of electricity distribution companies is very high. Therefore, the percentage of the rate of return on the RAB-tariff, which was set before the old asset base, derives from the established value of the regulatory asset base.

- Is there any risk that companies will be able to manipulate the figures that determine the size of the asset to make more profit?

- The risk of overstatement of the regulatory asset base by the participants of this process remains. Understanding this risk, the role of the NEURC as the regulator is extremely important, and it should ensure transparent application of established legislation. To do this, the regulator must be truly independent, the system must build mechanisms to prevent illegal influence on the regulator by interested participants.

The regulator’s role is important not only for the establishment of RAB-tariffs but also in monitoring the implementation of regulatory criteria being a condition for the application of RAB-tariffs for specific electricity distribution companies.

- How often should these tariffs be reviewed, and will it be important to review them in case of certain manipulations or in case they stop working?